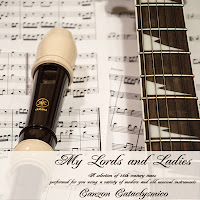 With twelve tracks finished I decided to draw a line and call this project finished. There are many more 'Lords and Ladies' but I have other ideas that I'd like to explore.

The music is played directly from the old sheet music, maintaining the renaissance feel of the music, with additional rhythms and guitar improvisation for a modern rock sound. I'm very proud of the result.


It's available for listening and, if you'd like to keep it forever, for purchase, in two places so far - Bandcamp and CD Baby.

https://store.cdbaby.com/cd/canzoncataclysmico
Posted by peahen at 02:21 No comments:

This traditional ballad didn't really fit with the rest of the tunes that I've been recording. It is said to date back to the 17th century as 'testament of the poisoned man' or similar (and in Italian I think). But that had a very different tune.

The version I came across and really liked was by a Victorian gentleman, Granville Bantock. But I went with it anyway. Hey, they're my rules. And did what I felt was right. An opportunity to play a slow melody flugelhorn solo as the intro and finish, and get a bit raucous in the middle.

That doesn't really fit with the sentiment of the song, which is a conversation between Lord Rendal (or Randal sometimes) and his mother. He's feeling pretty ill and it turns out that he's been poisoned by his sweetheart. His mother seems more concerned about what things he's leaving to members of his family.


That makes 12 tracks now, and I'm going to start uploading them for purchase at Bandcamp and other sites, and preparing myself for the sound of tumbleweed.