Gaudete, as arranged by Chalice


Chalice have come along with a version of Gaudete which sounds exactly the way I've been trying to sound. I've copied it note-for-note (let's call it what it is, I don't like the word 'cover') in order to learn. I hope Chalice aren't offended (I love you folks and bought the album!)
Posted by S P Dixon at 15:44 No comments:

For house-selling reasons I had to pack a lot of gear away before Christmas. Capriol Suite was pretty much finished, I was messing around with some additional parts but not really finding any improvements.

So I've decided that there's nothing more to do, and have published the short album, complete with a rather irreverent cover. Peter Warlock was an unconventional guy and so I'm sure he would approve of what I've done with his music and his photo. Click the picture to visit bandcamp and listen / download. 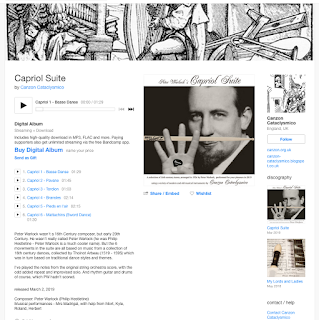 With the Capriol Suite drawing to completion, my thoughts have been turning to the difficulty of explaining what the heck my music is supposed to be about.

What better way to totally confuse the issue than through the medium of a comic? 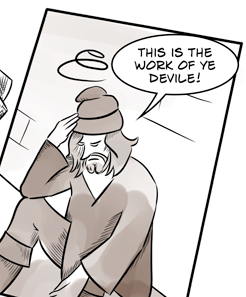 This is the (probably) true story of a meeting of musicians across time and an unlikely fusion of new and old music.

I've drawn and published the first episode at Tapas. The platform allows me to add a piece of music via SoundCloud to accompany each episode.

Part one of the origin story is longer than I intend future episodes.  I've added one of the pieces from My Lords and Ladies called Danse de Buffons, which seemed appropriate for a number of reasons.

Feet in the air? Who knows.

This is the fifth and penultimate movement from Peter Warlock's Capriol Suite. I'm delighted with the  way it sounds but it isn't really what I had in mind to start with. It's a bit of a departure from the other movements I've done, but maybe that's a good thing.

It's not as 'rock' as I wanted but the upright bass and brushes sounded great.

The sheet music looks like a hymn tune and sounds lovely when played by a brass band. I've played 3 parts on brass; flugelhorn, trombone (which is actually my flugel octaved down) and harmon-muted cornet. The resulting 'brass section' sounds good but totally different from the brass in the second movement (Pavane). Maybe when I have a better studio setup I'll record it all again and be more consistent.

The improvised guitar on top sounds ok, I think and is my way of saying 'no, this isn't lounge jazz'.

Of the movements in this Capriol Suite project, this is the longest and it has been the most challenging.


It has all sorts of counter-melodies and cross-rhythms going on, it was far cry from simply deciding which instrument to play which of the original string orchestra parts on. It has many sections; the intro and letters A. through to L. Each is different and needed to be thought about separately.

It is the most exciting movement, and having done this I feel I've broken the back of this whole project.

In my last post I had almost finished the Tordion from Capriol Suite. But there were some embarrassing dodgy high notes on the descant recorder part. I've since bought a sopranino and have been able to re-record those same notes in a more comfortable register.

I'm much happier with it. It's starting to sound finished.

Third movement of Capriol Suite finished, with a little remedial work to do

This is movement 3, a 'Tordion' which is a light dance "popular from the mid-15th to the late-16th centuries" (it sez on Wikipedia).


On paper there doesn't seem to be too much to it; it's a light dance, and like the first two movements of Capriol, fairly short. I noticed that up till letter B there's a swell and change of style on every fourth bar, so I've souped that up a bit; the biggest is the third time that happens. After letter B (on the sheet music) there's a gradual dim with a change of style from stacc. to pizz. with a gradual dying away so I've tried to reflect that, switching to clean sound at D. That change is not very noticeable because I'm palm-muting throughout (except for the breakouts.)

The top part (Violin 1), which I'm playing on soprano recorder, reaches to the top of the range and in order to hit the top C's I'm whacking them a bit hard. I should get hold of a sopranino so I can play those high parts with a little more finesse.
Posted by S P Dixon at 10:10 No comments: